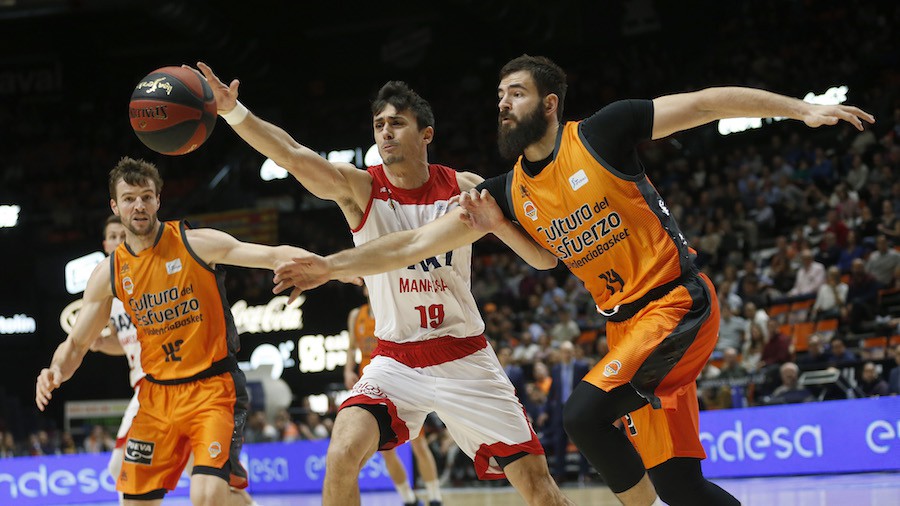 Equaled match except for the second period, where the premises opened a gap that the Bages team reduced to 5 points. Renfroe (12) and Toolson (13) are again the topscorers, followed by Muñoz and Gintvainis (11).

BAXI Manresa could not surprise Fonteta, where Valencia Basket was imposed, fundamentally thanks to the success of the second period, the worst of the visitors. Despite the hole that opened the oranges, BAXI Manresa did not give up at any time and got 5 points in the last quarter. Renfroe was the most successful with 14 points, along with Toolson (13). Muñoz and Gintvainis provided from the bench 11 points each.

The one of the Font de Sant Lluís could be analyzed as an equal match if we discounted the second period. The match started, with Doellman responding with a three-pointer the initial basket. Several draws with exchange of baskets, until the visitors opened a small slit of 5 points, with a three-pointer of Gintvainis. Valencia responded to leave the 18-20.

From minute 10 to 20 they were the worst moments of the Bages team, who lost the partial by 32 to 17. Basically too many points, right from Valencia of Ponsarnau would open a hole that seemed (and eventually would be) irreparable. Although Muñoz began with a three-pointer, the local successes, led by Dubljevic, punished brave before the break. Toolson trimmed with 2 more 1.

After passing through the changing rooms, 10 equaled minutes more, with three-pointers of Doellman and Renfroe. Renfroe pointed to it, and the success of Muñoz left Manresa to 13 points when the difference had reached 20. It was necessary to go up 13 points in the last period.

Sakho wrote down the first basket of the last quarter, and two consecutive three-pointers of Muñoz forced Jaume Ponsarnau to ask for a minute. Manresa was only 6 points below. Toolson scored from the free throw line to put the team at only 5 points, but in the final straight, Dubljevic and his team did not give an option, and ended up equalizing the partial to maintain the advantage.