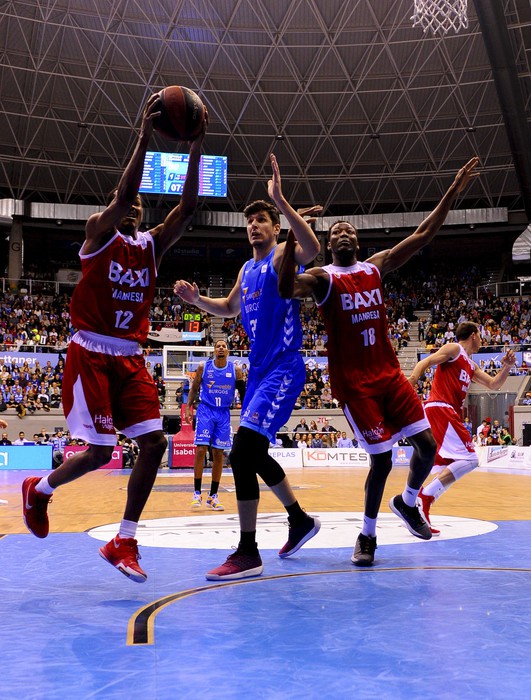 Another victory away from home for BAXI Manresa, now in the first visit in many years at the Coliseum de Burgos. Very serious and solid match of the Bages team, which this season almost count away games by victories. Dragovic uncovered himself as a scorer with 13 points, and Toolson exercised a stiletto with 19. Tranquility and good management in the final minutes to seal another game won, which leaves the red team seventh provisionally. The game started with Toolson being intervened by a wound in the eyebrow, but the American would be remade in a few minutes. Lundberg replaced and scored the first points. In the first quarter the locals found some advantage in the last minutes, but just 30 seconds from the end Toolson reappeared with a triple. In the second period, start of difficulties for the two teams in attack, and Doellman's triple to tie. The Castilians opened again, but Toolson and Dragovic's three-pointers turned the scoreboard over. Very good run of Dragovic at the end of the first part, with 7 points that gave 5 points of rent. In the third quarter, good work by BAXI Manresa, who kept the rival at bay to reach an end, at least, adjusted. Good combination of equipment and pass through the back of Toolson because Dragovic culminated with a triple, the best play of the game. Sakho worked in the paint to charge free throws, and with a triple Lundberg limit came almost at the end of the period. In the final stretch, the defense was the key to seal the victory in Burgos: only 14 points conceded and good management of the last moments. Initial defense and counterattack by Toolson, which was hanging. Pere Tomás also scored with a triple released. There were already 9 points and we had to manage time and result, something that the team did perfectly. Joan Peñarroya, in the press room, said that "we have played a very serious game; in the first part I was not happy about everything, but despite having lost 10 balls we finished the first part above, in the second part they punished us in defensive rebound situations, but I think the team has been very solid, well in the defense of the pick & roll, and we took a victory of a difficult track, of a pavilion with a great atmosphere " .