BAXI Manresa will meet its first rivals in the draw this Wednesday at 12:00 noon

The Basketball Champions League Board has approved the competition format for the 2021-22 BCL Season. This format will be implemented as of the sixth season of the competition, debuting next October.

The BCL Club Council and the BCL Competition Committee have met virtually over the last months and, following extensive discussions, have made their relevant proposals to the Board. It was agreed by all stakeholders that this format would create games of competitive intensity as the result of each game truly matters. This format would also maximise the commercial appeal of the BCL, and would further develop the collaboration with the European member leagues, by promoting and protecting the national competitions to an even greater extent.

The competition format is as follows: 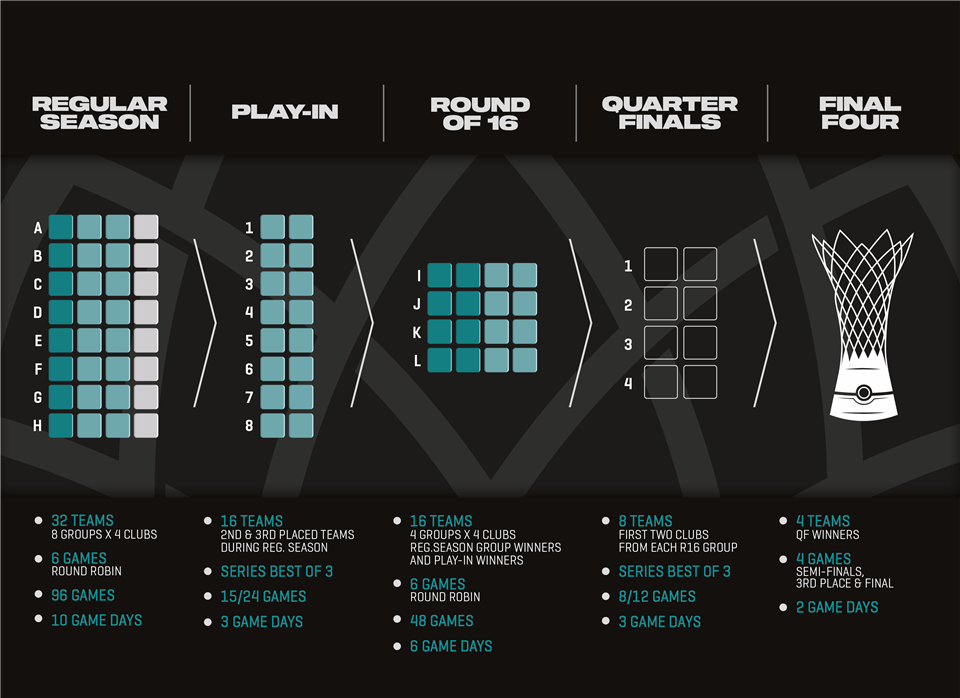 The Regular Season phase will be composed by 32 clubs, 28 directly qualified and 4 advancing from the Qualification Rounds. Teams will be split in 8 groups of 4 clubs each, and play in a round robin, home & away, system from October to December. The first-placed teams in each group will qualify directly for the Round of 16 phase. The second and third-placed teams will face each other in a Play-In to qualify to the Round of 16.

The Play-In phase will be composed of 16 clubs; the second and third-placed teams of the 8 Regular Season groups (see detailed explanations about the pairings here). Teams will play a best-of-3 series over the month of January, with the home advantage to the second-placed teams. The 8 Play-In winners will join the 8 Regular Season group winners, already qualified, in the Round of 16.

The Round of 16 phase will be composed by 16 clubs, the 8 first-placed teams coming from the Regular Season, and the 8 winners of the Play-In phase. They will be split in 4 groups of 4 clubs each and play in a round robin, home & away, system from end of January to March. The first two teams in each group will qualify for the Quarter-Finals.

The Quarter-Finals phase will be composed by 8 clubs, the first two teams of each Round of 16 group. Teams will play a best-of-3 series over the month of April, with the home advantage to the first-placed teams. The 4 winners will qualify for the Final Four.

A Final Four tournament will conclude the season. The 4 qualified teams will play over a weekend in May, with the Semi-Finals on Friday and the Finals on Sunday.

This competitive and dynamic format will reward each position in the standings, will increase the value for fans, broadcasters and sponsors, and will offer a guaranteed European season until the end of the calendar year to all participating clubs.

For the purpose of the Draw, the twenty-eight (28) directly qualified teams and the four (4) teams coming from the Qualification Rounds will be divided into four (4) pots of eight (8) teams each. The pots are based on the abovementioned BCL Club and Country Rankings.

Country protection applies for this stage of the Draw: clubs cannot be drawn in groups with other clubs from the same country.

The Official Draw Ceremony will be streamed live on www.championsleague.basketball, on Wednesday July 7, from 11:00 CET.