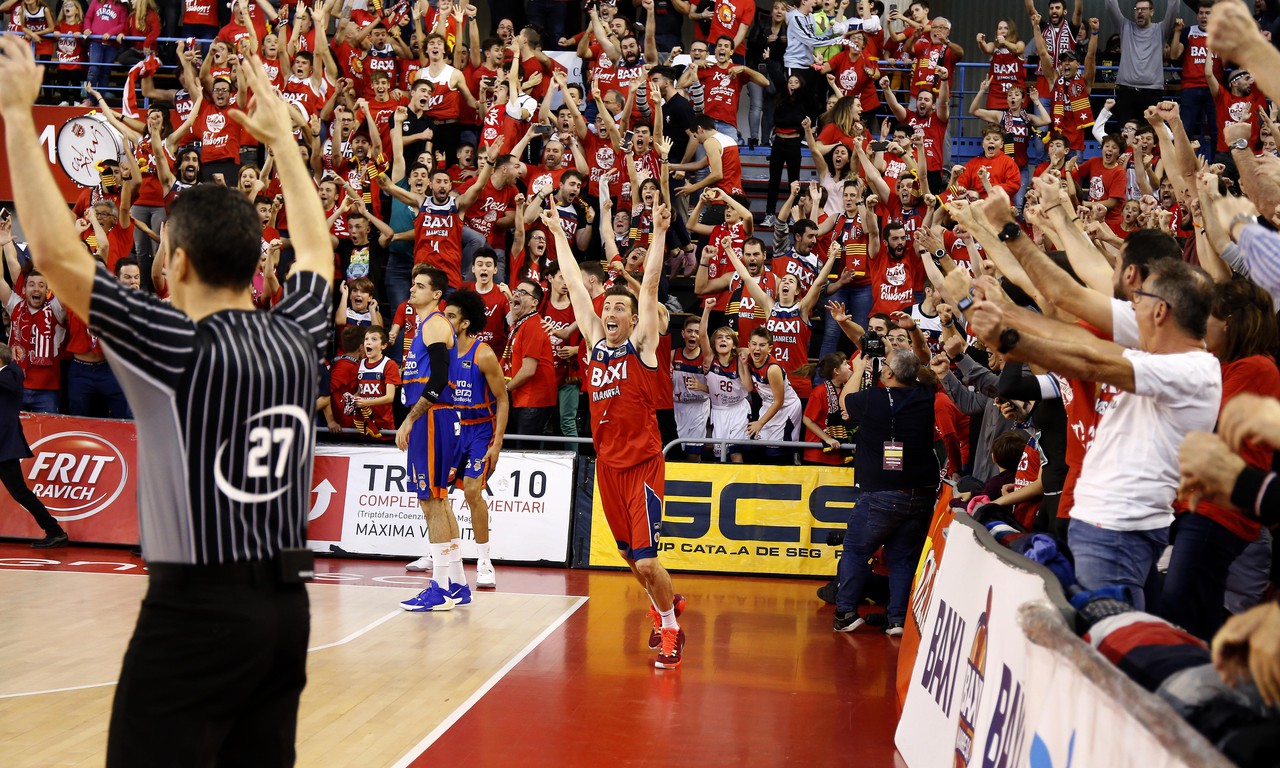 The Bagencas made an almost perfect first period where they reached a rent of 17 points. This pillow would be administered by the Manresans in the second and third half, but in the last, a final push of the Valencians equalized the game to 2 minutes to finish. A Toolson triple with 2 seconds left in the end would unbalance the scales in favor of BAXI Manresa.

The game started with a distant triple and a Dulkys tray. A new start from beyond Toolson's 6.75 gave the home side a 7-point lead in the first 2 minutes of play. The BAXI Manresa kept their feet on the accelerator and scored easily, unlike Valencia, which encountered an intense Manresa defense that made it difficult for them to launch easily. Kravish took advantage of the direction of Dani Pérez (6 assists in this half) and forced Jaume Ponsarnau to stop the game with his 13 points below. Despite the attempt to disable the Catalan coach Manresans, the home side remained an unstoppable storm and finished one of the best quarters of the season with a 17-point lead.

The team led by Pedro Martínez controlled the game managing the difference of the first half and did not let go of the Valencian team. The baskets of Dani Pérez and the free throws of Báez and Mitrovic were not enough to withstand a final onslaught of Valencia Basket, which reduced the gap to 10 points at the end of the first half of the match.

Valencia took advantage of the mistakes of the BAXI Manresa in the first stages of the third period to continue to reduce the distances. Shots from the line by Dani Pérez and infallible Ryan Toolson, added to a basket below Vaulet, again left the Manresans at the psychological barrier of 10 points. The home side got a 6-0 lead to consolidate their cushion and regain control of the match.

With a 12 point lead the last period started. A triple from Magarity cut a streak of 6 consecutive points from the Valencians. The visitors took advantage of a loss to reduce the gap to 5 points. Magarity's mobility dismounted the visiting defense and tied up three easy baskets to keep the game going and lead the game. The errors in attack of the BAXI Manresa at the key moment began to invoice and Valencia was approaching until equalizing the luminous one to 2 minutes to finish. Dani Pérez scored and answered Dubljevic to draw at 40 seconds in the end. A Dulkys hook put the Manresans ahead and Jaume Ponsarnau stopped the game to prepare for the last possession. Abalde put the boards back on the scoreboard with 2 seconds to go and Pedro Martínez called for a new timeout to try and get the game one shot. The move of the Catalan coach went perfectly and Toolson would take the responsibility to score a buzzer beater from the triple and leave the victory at the New Gorge.