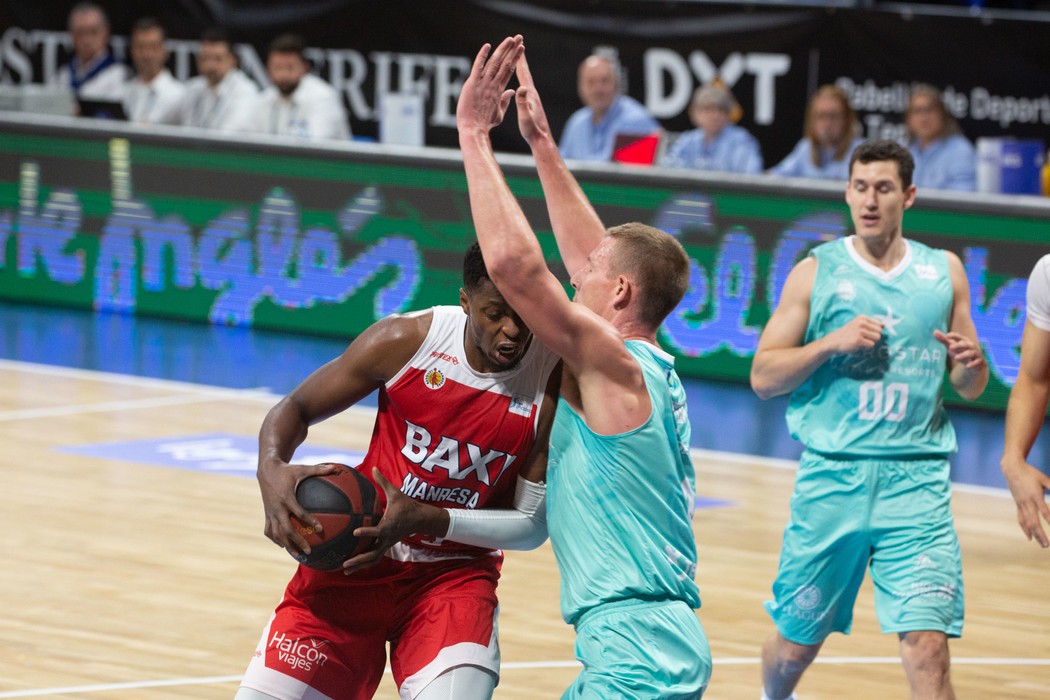 Another heroic match of BAXI Manresa, that with very few troops had in the hands to force the extension in Tenerife that could afford the luxury of dispensing with men like Davin White. Pere Tomas had in his hands force the extension with 2 free throws, but it could not be. Lalanne scored 22 points in a feat of the Manresa.

BAXI Manresa managed to keep the match even until the end. At the beginning, such as in Santiago, Dragovic with the external success kept the team, along with Muñoz. The referees pointed out the first foul in favor of the visitors at 01:50 to finish the first period, and the Bages left 2 points in the first quarter.

Second quarter equally matched, and with success of Iffe, Pere and Toolson for not leaving the rival. Cady Lalanne began to score from the paint to give strength to Manresa.

In the second half, Lalanne was still holding the team from below and scoring from 5-6 meters without failing. The fouls on the shots, especially three pointers, allowed to score from 4.60. Within 30 seconds of finishing the third quarter, Toolson left Manresa with 2 points, and the feat was already done: reach the last 10 minutes with options.

in the last minutes, a foul in Lundberg's attack and another of debatable left him out of the game having played 26 minutes. But the team did not give up, and would keep fighting until they had options. Three-pointer of Toolson and 8 points of Lalanne that allowed to draw at 01:40 of the end. Tomàs's free throws did not enter, but the team made all his fans feel proud.

Joan Peñarroya said in the press conference that "it is clear that they have taken the initiative and have dominated on the scoreboard, but we have entered the match with three-pointers, offensive rebounds, even free throws for force the extension, losing is always bad, but there are defeats that leave better feelings than some victory, it is one of the days that as a team we should feel proud of what we have done, reaching the final minute with options with everything that has spent during the match, there are things we could have done better, but the team has competed against you ".